You are here: Home / Obituaries / William B. Fenner 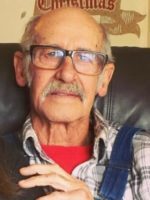 He was born February 1, 1938 in Plainwell the son of Bruce and Margaret (Mott) Fenner. Bill proudly served his country in the U.S. Navy. For many years he had worked as a truck driver. He was a member of the Teamsters Union. Bill enjoyed antique tractors, model trains and railroads, gardening and woodworking. Bill was happiest when surrounded by his family. He married Sharon Cardiff who passed away in 2014.

He was preceded in death by his parents; step-parents; wife and siblings, Clifford Fenner, Sharon Meacham and Beverly Roman.

Burial of ashes will take place at 2:30 P.M. at East Martin Cemetery.

Contributions in memory of Bill may be made to Southern Care Hospice.

Offer Condolence for the family of William B. Fenner