You are here: Home / Obituaries / William A. Bibart 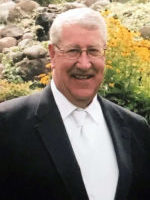 He was born June 14, 1945 in Newark, Ohio, the son of James and Helen (Munkachy) Bibart. Bill graduated from Newark High School and earned his bachelor’s degree from Michigan State University and his master’s degree from Central Michigan University. For 25 years he had taught business at Garber High School in Essexville until his retirement in 1994.

In his free time Bill enjoyed spending time in the Petoskey area, boating, fishing with his grandchildren, fly fishing, golfing and coaching football and swim. Bill had lived in Essexville for 40 years and was a member of the Bay City Elks.

In 1969 in Henderson, Kentucky he married Karen Bland who survives.

A private family gathering will be held at a later time.

Contributions in memory of Bill may be made to St. Jude Children’s Research Hospital or to Christian Neighbors.

Offer Condolence for the family of William A. Bibart