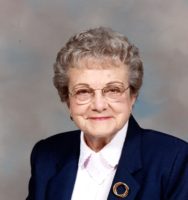 She was born November 29, 1919 in Kalamazoo, the daughter of Edward and Lora (Kane) Smith. For many years she was a secretary for the Upjohn Company.

When Virgie was 15 years old she met the love of her life, Thomas Tipton. They were married four years later and spent 54 happy and beautiful years together until his passing in 1993. Virgie was a life member of the Order of the Eastern Star, Loyalty Chapter #497 and was awarded the Matron of Charter, Grand Committee and Marshall of the State of Michigan. She was also an active member of the Parchment United Methodist Church.

Surviving are several nieces and nephews.

She was preceded in death by her parents, husband, sisters, Veta Leversee and Ires Kimmell and her brother, Charles Smith.

According to her wishes cremation has taken place. Burial of ashes will take place at Robinson Cemetery in Gobles at a later time.

A word of advice from someone who has been on this earth for 100 years: In life, “balance the good, and the bad, and move on.” “Be grateful for what you have and the time you had.”

Contributions in memory of Virgie may be made to Allegan County Medical Care Community.

Offer Condolence for the family of Virgie E. Tipton