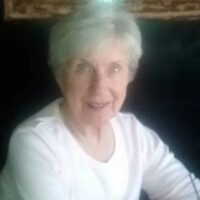 Thresa May  Todd of Swartz Creek, died June 5, 2022.  Service will be held 11 AM Saturday June 18 at Sharp Funeral Homes, Miller Road Chapel, 8138 Miller Road,  Swartz Creek.  Visitation will be 10AM Saturday June 18 until time of service at the funeral home.  Those desiring make contributions to the March of Dimes.  Thresa was born July 15, 1938 in Forest Township near Tower, the daughter of Sylvester and Anna (Wahlers) Eagleson. After spending early childhood years here , the family moved to Pinconning and later to Flint where she attended Flint Central High School.  Thresa shared many interesting stories with  her daughters growing up in Flint.  On November 23, 1957 she married Benjamin F. “Frank” Todd in a double wedding ceremony with best friends, Euel and Marie Henderson with which  they remained lifelong friends. Thresa and Frank made their home in Swartz Creek, she took great pride in her home and family.  After her daughters were raised, Thresa worked part time in the hosiery and luggage department at Sears in the Genesee Valley Mall. Thresa’s hobbies included sewing clothes, ceramic and tole painting on items crafted by her husband, Frank, in his woodshop.  For fun she took a variety of community enrichment classes, attended many music concerts with neighbors at the Fred Pajtas Amphitheater, as well as occasional trips to the casino. She enjoyed playing Yahtzee and board games with her grandchildren and was a top notch Cribbage player and loved to play whenever the chance arose.  Survivors include her daughters, Janice (Mark) Walker, and Linda (Chris) Pobocik; grandchildren, Benjamin (Amy) Pobocik, Bethany (William ) Thuku, Joshua (Tara)  Dew, Joseph (Paula) Pobocik and Nathan Dew; 15 great grandchildren; 2 great-great grandchildren; sisters MaryAnn Sproul, Catherine (Lyle) Hoffman, Shirley (James) Valentine, and Judy McGuire; and her brother, Bud.  She was preceded in death by her husband, Frank; sister,  Dorothy “June” Brett and her brother, Virgil Lee Eagleson.

Offer Condolence for the family of Thresa M. Todd