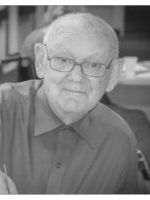 Ted M. Kisabeth of Alma, MI gained his wings February 8, 2019 at the Masonic Home in Alma. He was born March 22, 1934 in Pennsylvania, the son of Everett and Essie (Cook) Kisabeth. He graduated from Newberry High School and proudly served his country in the U.S. Army during the Korean War. On June 28, 1958 he married Mary Joanne Feneley who passed away in 2010. In the 1960’s Ted moved from the U.P to the east side of the state and had worked at Caterpillar for many years. In 1988 Ted returned to the U.P. and worked at Soders Fish and Hunt and Watsons. He enjoyed hunting, fishing, fixing lawn mowers and boat motors, gardening and trips to the casino. For the past 11 years Ted had lived at the Masonic Home in Alma. There he enjoyed doing the mail and paper routes. He really went out of his way to make people smile and help brighten their day. He was the best.

According to his wishes cremation has taken place. A graveside service will be held at 11:00 A.M., Friday, June 28, 2019 at the Woodlawn Cemetery in Curtis, Michigan. A luncheon will follow at the Curtis Community Building.

Offer Condolence for the family of Ted M. Kisabeth