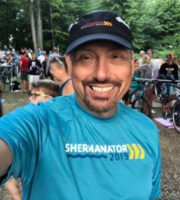 Steve passed away Monday, January 6, 2020 at his home in Otsego.

He was born December 30, 1960 in Kalamazoo the son of Laverne and Joyce (Heighton) Abbott. Steve graduated from the University of Michigan in 1984 and earned his MBA from Western Michigan University in 1993. He had worked at Parker Hannifin for 35 years.

Steve loved running and biking and was a member of the Kalamazoo TriKats. He helped organize the Shermanator Triathlon at Sherman Lake YMCA. He also enjoyed hiking and spending time in the Smoky Mountains with his family.

Steve was very handy with home improvements and construction projects. He also enjoyed doing chores on the family farm, except for milking goats. Steve was kind hearted, had a great sense of humor and was always making a new friend. On May 31, 1986 he married Caroline Winters who survives.

Also surviving are his children, Anneliese, Elizabeth, Laura and Tim all of Otsego; siblings, Deb (Don) Reed of Constantine, Teresa (Dan) Behrmann of Comstock and Ken (Liz) Abbott of Texas along with many nieces and nephews.

A memorial service will take place at 11:00 A.M., Saturday, February 8, 2020 at the First Baptist Church of Otsego with Pastor Paul Laborde officiating.

Contributions in memory of Steve may be made to Wings of Hope Hospice or the First Baptist Church of Otsego.

Offer Condolence for the family of Steven L. Abbott