You are here: Home / Obituaries / Steve A. Holmes 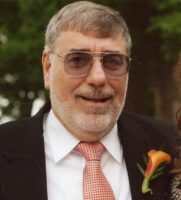 Steve passed away Sunday, September 5, 2021 at his home in Otsego.

He was born April 18, 1954, in Allegan, the son of Earl and Mable (Kurtz) Holmes. For 37 years Steve worked for AT&T. In his free time he enjoyed woodworking, tinkering around the house, doing home improvements and was always willing to help his family and friends. On June 5, 1976 at Otsego Church of God, he married Marie Watson who survives.

He was preceded in death by his parents and brother, Kendall Holmes.

Burial of ashes will take place at Mountain Home Cemetery in Otsego.

Contributions in memory of Steve may be made to Hospice Care of Southwest Michigan.

Offer Condolence for the family of Steve A. Holmes