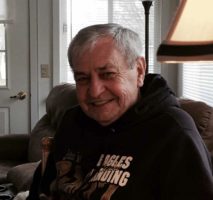 Stan passed away Saturday, November 30, 2019 at the Wings Home in Allegan.

He was born October 13, 1938 in Port Austin, Michigan, the son of Stanley and Sally (Maurer) Fisher. Stan proudly served his country in the U.S. Army during the Korean War. For many years he had worked at Hubbard State Bank in Bad Axe and was a painter in his spare time. He had also owned and operated a grocery store with his brother, Tony. Stan had a kind heart and enjoyed helping disabled members of his community.

He was preceded in death by his parents, wife, Crystal in 2010 and siblings, Tony and Jenny.

Burial of ashes will take place at St. Michael Cemetery in Port Austin at a later time.

Contributions in memory of Stan may be made to the Aleda E. Lutz VA Medical Center in Saginaw.

Offer Condolence for the family of Stanley Fisher Jr.