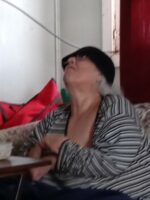 Shelley passed away Tuesday, November 8, 2022 at Rose Arbor in Kalamazoo. She was born October 18, 1953 in Otsego, the daughter of Willard “Buck” and Bonnie (Simington) Harper.

Shelley graduated from Otsego High School in 1971 and was the home run derby queen. She worked at several area nursing homes over the years including Alamo Nursing Home, Dussia House and Stanford Lodge. In her free time Shelley enjoyed doing puzzle books, crocheting, going for walks, spending time on her porch and was an avid Detroit Tigers fan.

She was preceded in death by her parents, husband, and infant sister, Terry.

A memorial service will be held Tuesday, November 22, 2022 at 11:00 A.M., at the Fountain of Truth Apostolic Tabernacle in Orangeville with Pastor Danny Jimenez officiating. Burial of ashes will take place at Mountain Home Cemetery in Otsego.

Contributions in memory of Shelley may be made to the family for funeral expenses.

Offer Condolence for the family of Shelley Campbell