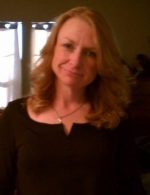 Shannon passed away Friday, March 29, 2019 at Borgess Medical Center. She was born July 19, 1973 in Plainwell to David and June (Main) Dunklee. Shannon attended Martin High school. She married Daniel Dever on December 5, 1998 in Hopkins, Michigan. She was a bundle of energy and determination, which served her well while raising their 4 children and earning her GED. They were stationed in Arizona and Colorado for most of Dan’s Military career. She served right alongside him through 4 deployments while raising their children and being a Mom and mentor to many of the younger Soldiers. She and Dan were active with the Combat Vets Motorcycle Association 35-4. She was also a terrific baker, a talented seamstress, enjoyed embroidery, and was an avid U of M football fan. Above all else Shannon loved her role as wife, mother and grandmother. She was great at bringing all her family together. Survivors include her husband Dan; children, Dylan Dunklee (Stephanie) of Hastings, Erik Dever of Hastings, Chelsie Dever of Gobles and Mickayla Dever of Gobles; grandchildren, Liam, Gracelynn and Jaxxon; her father David Dunklee (Peggy) of Allegan; and siblings, Kim Rathbun (Robert) of Hastings, Shaun Dunklee (Brandy) of Otsego, Missy Rodriguez (Elvis) of Otsego, Shandy Evink (Daniel) of Kalamazoo and Brandon Rantz (Adam) of Kalamazoo. Her mother preceded her in death. A Celebration of Life service will be held at 2:00 pm on Saturday, April 13, 2019 at the Winkel Funeral Home, Otsego. The family will receive friends beginning at 1:00 pm. In lieu of flowers, memorials may be given to a college fund for her daughter Mickayla. Messages of condolence may be posted at www.WinkelFuneralHome.com.

Offer Condolence for the family of Shannon M. Dever