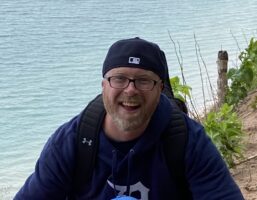 Scott Steven Haynes was a loving husband, an adored father, a beloved son, and a good friend.  Scott passed unexpectedly on September 28, 2020 to join his Lord and Savior, but leaves behind the legacy of a good man.

Scott was born May 31, 1977 to Dart and Pamela (Patton) Haynes in Jackson, MI.  Their only child, Scott lit up his parents’ lives with his bright smile and loving nature.  Growing up on White Lake, Scott spent his childhood fishing, swimming, playing pond hockey, and many other adventures. Scott graduated from Northwest High School in 1995, where he then went on to attend Jackson Community College before transferring to Western Michigan University.

It was while living in Kalamazoo that he met the love of his life, Kiley Kievit.  Scott and Kiley married on September 24, 2010, and brought Scott’s two greatest joys into the world, their sons Nicholas and Alexander.

An avid University of Michigan fan, Scott loved watching Big 10 football, and especially basketball.  A season ticket holder for Wolverine basketball, Scott was frequently in attendance, covered in Maize. Scott loved Harleys – always trying to convince Kiley she should get one, too – American history, and The Karate Kid.  He was also a lover of all animals, and the reason three large dogs now live in their home – they were too cute to say no.

Making their home in Plainwell, Scott spent his days working for Frito Lay, and his free time enjoying his family, whether teaching his boys carpentry or soccer, or spending quiet evenings with Kiley, he would frequently say he didn’t care where he was as long as he was with his family.

He is preceded in death by his father, Dart Haynes; his father-in-law, Thomas Kievit; his grandparents, Leona and Thomas Patton, and aunt Marjorie (Patton) England.

A private funeral and burial will be taking place.

Contributions in memory of Scott may be directed to an educational fund for his sons, Nicholas and Alexander.

Offer Condolence for the family of Scott S. Haynes