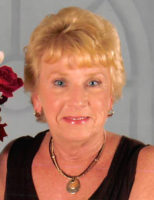 Sandi passed away Wednesday, May 20, 2020 at Rose Arbor Hospice in Kalamazoo.

She was born March 11, 1944 in Philadelphia, Pennsylvania, the daughter of Oliver and Gladys (Weiss) Scoble. Sandi was a graduate of Loy Norrix High School. In the early 90’s she had owned and operated County Ladies Truck Brokerage in Bradley and for over 20 years had worked at PNC Bank until her retirement in 2010. In retirement she worked at Walmart as a food sample demonstrator.

As a young woman Sandi was a member of the Kalamazoo Jaycees and served as the president. She was a skilled seamstress and enjoyed making clothing for her family. In her free time Sandi liked working in her yard, doing home improvements and taking care of her dogs.

Surviving are her daughters, Stacey Withee of Otsego and Wendy Withee of Colorado; her granddogs; siblings, Oliver II (Dona) Scoble of Utah, Thomas Scoble of Colorado and Janice Cardinal of Florida along with several nieces and nephews.

She was preceded in death by her parents and brother, Frederick Scoble.

Contributions in memory of Sandi may be made to the SPCA of Southwest Michigan or Christian Neighbors.

Offer Condolence for the family of Sandra L. Withee