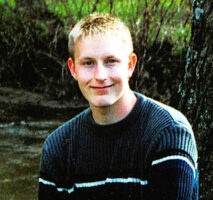 He was born November 17, 1983 in Plainwell, the son of Richard and Terri (Warner) Story. Ryan attended KVCC majoring in machining and had worked an internship at Pharmacia. He also worked security at the Kellogg Foundation and at Kalamazoo College.

Ryan enjoyed flying and being on the farm driving his grandfather’s tractor. He was a diehard Red Wings fan and loved playing hockey. He played for the Kalamazoo Eagles, K-Wings, in house hockey and the Grand Rapids Grizzlies.

He was preceded in death by his grandparents, Robert and Lois Story; grandfather, Trevor Warner; aunt, Kathleen Stratton and uncles, Rod Warner and Randy “Sid” Warner. According to his wishes cremation has taken place.

A private family burial of ashes and celebration of Ryan’s life will be held at a later time.

Contributions in memory of Ryan may be made to the Juvenile Diabetes Research Foundation.

Offer Condolence for the family of Ryan D. Story