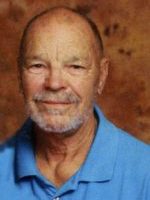 He was born December 15, 1935 in Plainwell the son of Eldon and Julia (Stewart) Fisher. After high school Russ had worked at Michigan Cottage Cheese and as a supervisor at Menasha for over 35 years retiring in the late 1980’s.

He enjoyed whistling, racing trottingbred horses, antiquing, and following his kids and grandchildren’s sporting events. In 1984 at the Otsego United Methodist Church he married Shirley Senese who survives.

He was preceded in death by his parents and daughter, Sandy Richards.

Private family burial of ashes will take place at Mountain Home Cemetery at a later time.

Contributions in memory of Russ may be made to Southern Care Hospice or Otsego United Methodist Church.

Offer Condolence for the family of Russell E. Fisher