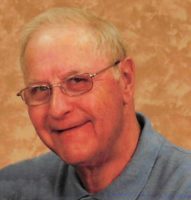 Ron passed away Friday, September 4, 2020 at his home in Kalamazoo.

He was born November 17, 1934 in Plainwell, the son of Calvin and Bessie (Turner) Newman. Ron was a graduate of Otsego High School. He proudly served his country in the U.S. Army in Germany. For 44 years Ron worked at Plainwell Paper until his retirement in 1997.

In his free time Ron enjoyed trips to the casino and going out for coffee with his friends. He liked watching MSU basketball and the Detroit Tigers and Lions. Most of all he loved watching his grandsons play sports.

Ron was a member of the First Congregational Church of Otsego. On February 13, 1960 he married Mary Patricia Newman who passed away in April.

He was preceded in death by his parents, wife and brother, John Newman.

Burial of ashes will take place at Prairieville Cemetery at a later time.

Contributions in memory of Ron may be made to Kalamazoo Loaves and Fishes.

Offer Condolence for the family of Ronald Newman Jr.