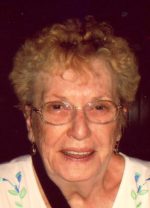 She was born February 24, 1929 in Kalamazoo, the daughter of Floyd and Cora (Buckalew) Emmons. Romilda enjoyed knitting, crochething, growing orchids and playing golf. She loved shopping, her pets and most of all her family. Romilda was a member of the Order of the Eastern Star and was active in the Otsego VFW with her husband.

She was preceded in death by her parents and husband.

Burial of ashes will take place at Mountain Home Cemetery in Otsego Township at a later time.

Contributions in memory of Romilda may be made to the American Cancer Society.

Offer Condolence for the family of Romilda M. LaCoss