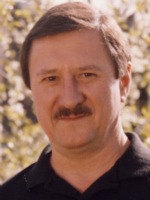 It is with great sadness that we announce the death of our husband, father and grandfather, Roger Lee Bush. He died February 1, 2007 after an 8 year battle with the neurological disease, Progressive Supranuclear Palsy. Roger was born on July 31, 1942, to Martha Maynard of Battle Creek and Zoe Walters of Paw Paw. Martha died in childbirth and since Martha and Zoe were not married Roger was placed for adoption and adopted by Walter (deceased) and Maxine (Bush) Dumonceaux. Roger’s mother loved her son as her very own and cherished him for his entire life.
Roger graduated from Comstock High School in 1960 and was a track star at the school. He married Francis TenBusschen in 1963, they divorced in 1966. Roger spent February of 1967 to February of 1968 in the infantry in Viet Nam. He was point man for his platoon for 11 months, a testimony to his fearlessness, tenacity and attention to detail. The average life span of a point man was from six days to six weeks. After returning from Viet Nam he married Henrietta “Ria” Klooster in 1969. The marriage was blessed with daughter Sandra (Cobine) and son Ryan Andrew. Ryan was born in 1975 and died in 1979 at the age of four. Ryan endured a short life of suffering and surgeries due to Pulmonary Atresia, a defect suspected to have been caused by his father’s long term exposure to the chemical Agent Orange during the Viet Nam war.
In 1999 Roger contacted his second cousin, Jim Higgs. Jim’s grandmother was a sister of Roger’s mother Martha Maynard. Jim is the family historian and genealogist and provided Roger with a picture of his mother. It was the first time in almost sixty years that Roger saw his birth mother. The Higgs family welcomed Roger with open arms into their family. Roger worked at many places during his life and was a hard worker. He worked for the Shakespeare Company, the Gibson Guitar Company, the Kalamazoo Laundry and Root Spring Scraper. All things technical and philosophical fascinated Roger, he was a very intelligent man.
Roger was a kind man who treated everyone with respect. He loved and was kind to children and believed that children should be heard as well as seen. He loved animals and treated them with kindness as well. Roger is survived by his mother Maxine; his wife Ria; his daughter Sandra, her husband Mike Cobine and his granddaughter Kylie Noelle Cobine. Also surviving are his step-sister Nan Morton (Dumonceaux) and her husband Dave, step-brother Mike Bush and step-sister Marsha (Bush) Swinford and their families. A very special lady in Roger’s life, step-mom Helen Bush, also survives. We will miss Roger.
Cremation has taken place. A memorial service will be held at Winkel Funeral Home in Otsego on Saturday, February 10, 2007, at 11:00 A.M., Rev. Fr. Donald P. Klingler officiating. Burial of his ashes will take place in July 2007 at Mount Olivet Cemetery, Kalamazoo. Contributions in Roger’s memory may be made to Wings of Hope Hospice or Knights of Columbus, Council 7796.

Offer Condolence for the family of Roger Lee Bush