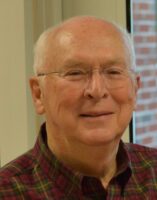 Preceded in death by his parents Oval and Dorothy Jackson.  His brothers Kenneth, Orville (Junior), Duane (Duke), James, and sister Denise Looman.  He is survived by the love of his life Cheryl, wife of over 56 years.  His children Jennifer and Stephen (Barbara Major).  His grandchildren Lucia, Eli, and Garrit Jackson of Chattanooga, Tennessee and Riley and Harris O’Gwynn of Auburn, Alabama.  Brother Dennis Jackson of Elwood, Indiana.  He loved family and held his nieces and nephews and extended family always in his thoughts.

Robert graduated from Otsego High School in 1961 and held several Associates degrees from Kalamazoo Valley Community College, a Bachelor of Science in Vocational Industrial Education from Western Michigan University, and an MBA from Vanderbilt University Owen School of Management.

Robert went to work for Eaton Corporation in 1968 and retired in 2001.  His thirty-three-year career took him and his family through 7 moves, two of which were international.  His dedication to his work and family allowed us all to see the world and learn and grow with him, while making dear friends in Michigan, North Carolina, Tennessee, Bowdon, England, and Shanghai, China.

Robert was dedicated to family, education, and community.  When he wasn’t researching family history, he was serving the community in many ways. He was a life member of the Elks Lodge. Was an active member of Rotary International in Shelbyville, Humboldt, and Monteagle, Tennessee.  Served as the President of the Monteagle Tennessee club from 2004-2006 and was awarded the Paul Harris Fellowship award in 2011. He served on University Advisory Boards for Motlow State Community College and Middle Tennessee State University, always eager to share his knowledge and to support education.

In lieu of flowers and to honor Robert, the family encourage you to donate to a classroom teacher, school, or library in your area.

Offer Condolence for the family of Robert K. Jackson