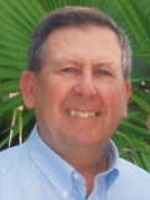 Robert J. Stamm Of Plainwell, Michigan, died Monday, September 11, 2006 at Rose Arbor Hospice of kidney cancer. But because of the life, death and resurrection of his Savior Jesus Christ, he was resurrected to Heaven for eternity. We picture him in his perfect body being lovingly welcomed at Heaven’s gate by his parents, Ike and Bea, grandparents, John and Stella, Carol’s parents, Claus and Nell Bos, a host of others who have gone on before, and being enveloped by the radiance of his Holy God. Bob was 63 years old. He leaves behind to be ministered to by God’s Spirit, his wife of 41 years, Carol; dear children Greg and Jodie Stamm and Tim and Amy Vreeman; also 5 wonderful grandchildren, Kailie, Madi and Emma Stamm and Lydia and Clark Vreeman. He is also survived by his brother, Ron and Sandy Stamm; Carol’s sisters, June and Bill Ahlberg and Jean and Bob Soeters; his Uncle John and Aunt Betty Stamm and Aunt Evelyn and Uncle Bob Ellis.

Bob was a long time active member of North Park Reformed Church and served as an elder, deacon and small group leader. He served in the U.S. Army during the Vietnam War. Bob and Carol moved to the Pine Meadows development in Plainwell two+ years ago and Bob was the first president of the Pine Meadows Association. A children’s playground and picnic area there were recently dedicated in his honor and named Stamm Park. He retired as a Police/Public Safety Officer from Kalamazoo after 26 years of service. He worked an additional 10 years as Court Security Officer in the Federal Courts in Kalamazoo and Grand Rapids.

Offer Condolence for the family of Robert J. Stamm