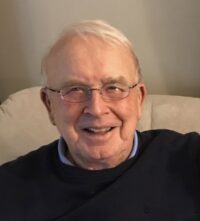 Robert J. “Bob” Miles of Otsego, MI passed away Saturday, May 15, 2021 at Rose Arbor Hospice in Kalamazoo. He was born February 12, 1938 in Paw Paw, the son of Tony and Helen (Reits) Pionke. Bob graduated from State High School in 1956. During his high school career he proved to be a top athlete. Bob was on the varsity football team for 4 years, All-State 2 years and served as captain of the team; the varsity basketball team for 3 years and set a school scoring record during the State Quarter Final game; the varsity baseball team for 4 years, the top hitter in Kalamazoo for 2 years and received All Southwestern Michigan honors; the varsity track team for 4 years and was on the 2nd place 880 relay team at the State Meet.  He also played Legion Baseball for Kalamazoo during the summer and was recruited for a try-out with the Detroit Tigers.  Bob earned 15 varsity letters and was on Kalamazoo All-City Teams in football, basketball and baseball. He went on to earn his Bachelor’s Degree from Kalamazoo College where he continued to excel in sports, earning 8 varsity letters in baseball, golf and football and was a co-captain of the football team his senior year and his and Master’s Degree  from Western Michigan University. Following his graduation Bob taught at Lincoln Jr. High in Kalamazoo then at Kalamazoo University High for a year before beginning his 34 year career at Otsego Public Schools.  He taught Social Studies and Math in junior high and coached junior high and J.V. basketball, high school football and baseball.  His coaching achievements included an undefeated baseball season with 22 consecutive wins and a football conference championship. He then served as Athletic Director and Assistant Principal of the High School and Middle School.  Bob retired in 1995. He loved playing in golf leagues recording 2 holes-in-one and a double eagle. Bob and Roberta spent winters in Florida and loved to meet with their son, Jeff, and his family.  Other favorite activities included watching birds, playing Bridge and Solitaire, computer video games, walking, going out to dinner, lunch or breakfast with friends.  He and Roberta went on several cruises [Alaska, Hawaii, Bermuda, and Paris/Normandy] and he loved to travel, including a recent trek to Italy.  He continued to follow sports on TV including professional and college football, March Madness, and cheering for U of M and the Tigers and Lions.  Bob had been a member of the Otsego Elks Lodge #1711 and the Retired Teachers.

On June 29, 1969 at the First Methodist Church in Kalamazoo he married the love of his life, Roberta L. Baker, who survives. Also surviving are son, Jeff (Heather) Miles of CT; 3 grandchildren, Cameron, Andrew and Haley Miles; his sister Mary Ann Eaton of Portage; many nieces and nephews. He was preceded in death by his parents; sister, Georgia Royce; and brothers-in-law, Jack Wooden, Bill Royce and Jay Eaton.

Friends may meet with Bob’s family on Wednesday, the 19th of May from 4 – 7 PM at Winkel Funeral Home in Otsego.  Graveside services will be held on May 20th at Mount Ever-Rest Cemetery South in Kalamazoo at 11am.

Contributions in memory of Bob may be made to Otsego Public Schools (OPS) Foundation.

Offer Condolence for the family of Robert J. Miles