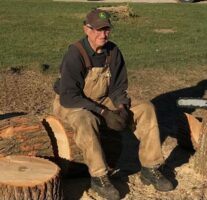 He was born March 20, 1938 in Kalamazoo, the son of John and Ruth (Jennings) McClellan. Bob loved working on his farm, being outdoors and driving his tractor. He could never pass up a good burger and had a sweet tooth especially for ice cream.  Bob liked preaching the Bible and was a member of the Merson Church where he taught Sunday School. Bob married Jean Hinga and together they raised 3 children, Dennis, Scott and Marcy. He then married his wife Marty who passed away in 2020.

He was preceded in death by his parents and wife.

A memorial service will be held at 11:00 A.M., Friday, November 25, 2022, at the Merson Church in Gobles with Pastor Alan Carson officiating.

Contributions in memory of Bob may be made to the Merson Church.

Offer Condolence for the family of Robert J. McClellan