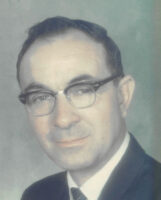 He was born April 5, 1927 in Monterey Township, the son of William and Susan (Manderfield) Garlock. Jerry proudly served his country in the U.S. Army during World War II. He worked at Mac Sim Bar Paper Mill for many years.

Jerry was a member of the Otsego Moose Lodge, Otsego VFW Post #3030 and the Allegan Eagles. On March 10, 1945 in Allegan, he married Betty Jean Lickley who passed away in 1996.

He was preceded in death by his parents, wife and siblings, Hollis, Jim and Rose.

Burial of ashes with Military Honors will take place at Fort Custer National Cemetery at a later time.

In lieu of flowers contributions in memory of Jerry may be made to the Otsego Moose Lodge.

Offer Condolence for the family of Robert G. Garlock