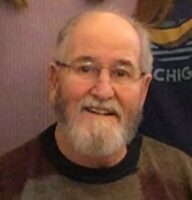 Rick passed away Wednesday, July 7, 2021 at his home in Plainwell.

He was born May 27, 1944 in Allegan the son of Norman and Alma (Taylor) Miller. Rick was a 1962 Otsego High School graduate. He proudly served his country in the U.S. Marine Corps serving 2 tours during Vietnam and earned a purple heart upon his honorable discharge. For over 37 years he owned and operated Rick Miller Well Drilling until his retirement in 2006. Rick would go out of his way to help others and often drilled wells for the elderly, free of charge, if they couldn’t afford his services.

Rick had a green thumb and enjoyed gardening. He liked being outdoors, hunting, ice fishing and looking for mushrooms. Rick loved spending time with his family, teaching his children to shoot and taking his children, nieces and nephews for rides on the sled behind the truck. On October 26, 2015 in Otsego, he married Shizuko “Suzie” Toyozato who survives.

Also surviving are children, Tammy (Dan) Hoffman, Stephanie (Kevin) Oldenberg, Lance (Bobby Jo Kenyon) Miller, Tina (Mike Kulyk) DeLoach and Jeon Yuri (Laura) DeLoach and 7 grandchildren, Daniel, Gil, Arianna, Ian, Mehl, Mari and Caroline along with nieces, nephews, great and great-great nieces and nephews. Special thanks to his niece and nephew, Shanon and Bryan along with his daughter, Tina for the wonderful care given in his final days.

Rick was preceded in death by his parents, step-father, Delbert Monroe and siblings Ted, Butch, Shirley and Dixie.

Friends may visit with Ricky’s family starting at 10:00 A.M., Tuesday, July 13, 2021 at the Winkel Funeral Home, Otsego, until the time of the memorial service at 11:00 A.M., with celebrant, Bill Rose officiating.

Contributions in memory of Rick may be made to Otsego VFW Post #3030.

Offer Condolence for the family of Ricky G. Miller