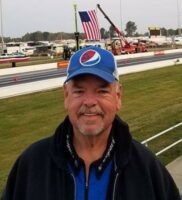 Rick went to be with the Lord, Wednesday, September 7, 2022, surrounded by family, at Bronson Hospital in Kalamazoo.

He was born November 16, 1951 in Detroit, the son of Adelbert and Corrine (Mersman) Froelich. Rick was a 1969 Plainwell High School graduate where he met his future wife, Jane aka Deb. He worked for Yoplait and Walmart as a perishable product relocation specialist for many years. He also owned and operated Golden Pizza in Otsego and Battle Creek.

Rick enjoyed drag racing, especially the past 50 years at the US Nationals with his 2nd family, vacationing in Sault Ste. Marie, spending time at Gun Lake and Saturdays garage saling with family. Most of all Rick loved spending time with his grandchildren. He was a member of the Otsego Church of God.

He was preceded in death by his parents, daughter, Marcia and brother, Tedd.

Friends may visit with Rick’s family starting at 1:00 P.M., Saturday, September 10, 2022, at the Otsego Church of God, until the time of the funeral service at 3:00 P.M., with Pastor Stephen Burrow officiating.

Contributions in memory of Rick may be made to Wings of Hope Hospice.

Offer Condolence for the family of Richard D. Froelich