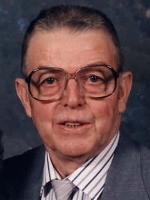 Raymond E. Lober of Plainwell, Michigan, died Friday, March 9, 2007 in Grand Rapids. Mr. Lober was born April 20, 1918 in Martin to Harold and Isoline (Wilcox) Lober and had helped to build the homestead.

He was an Army veteran of WWII, serving with the 79th Infantry Division in France and Germany.

Raymond farmed most of his life and enjoyed making stained glass pieces until his health failed. Toward the end of his life he especially enjoyed being with his grandchildren and made a habit of watching the Jerry Springer Show.

Friends may meet the family from 7 to 9 P.M. Monday, March 12, 2007 at the Winkel Funeral Home, Otsego, where services will be held at 1:30 A.M. Tuesday, Rev. Dan Minor officiating. Burial will follow at Hillside Cemetery, Plainwell, with military honors by V.F.W. Post #3030.

Contributions in his memory may be made to the American Heart Association of Michigan or the Battle Creek Veterans Administration Hospital.

Offer Condolence for the family of Raymond E. Lober