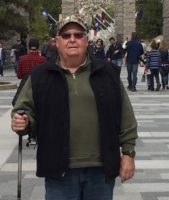 He was born August 7, 1947 in Plainwell the son of Leland and Irene (Johnson) Baker. Phil proudly served his country in U.S. Army. He was a 1965 Otsego High School graduate and lifelong resident of the area. For many years Phil had owned and operated an insurance agency in Otsego.

In his free time he enjoyed golfing, fishing, hunting and traveling with his wife. He was a member of the Lake Doster Golf Course, Otsego Elks and First Congregational Church of Otsego. In 1969 he married his high school sweetheart, Paula Tice who survives.

He was preceded in death by his parents; son, Troy; great-granddaughter, Zharielle; brother, Gerald Baker and father and mother-in-law, Gerald and Jane (Goodall) Tice.

Contributions in memory of Phil may be made to Allegan County Community Foundation or to the First Congregational Church of Otsego.

Offer Condolence for the family of Phillip L. Baker