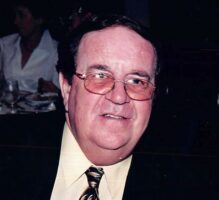 Phil loved his family deeply and deeply missed his wife Joyce after she passed in 2013. His prevailing wish was to be with her, and his wish was granted on July 15, 2021 when he passed away from natural causes.

Phil was born on March 6, 1938 in Mishawaka, Indiana, to Hilary and Catherine Berner. He had three brothers and two sisters (all now deceased). Originally from Mishawaka, the family moved to Otsego where Phil graduated from Otsego High School in 1956. He married the love of his life, Joyce Livingston, on July 22, 1962 and resided across from Leighton’s Mill Pond for 50 years where they raised their three children Laurie, Sean and Brent.

Phil loved cars – Corvette, Porsche, Chevy – anything that purred and went fast.  He shared that love with his sons Sean and Brent. They made an annual trip to Auburn, IN for the big car show and auction.  Big dually trucks turned out to be his final love and he passed that on to Brent. His daughter Laurie loved horses and he spent many years traveling to horse shows throughout Michigan on the weekends May – September. Acting as Laurie’s “groom” he drove the motorhome and horse trailer, including trips to Oklahoma City and Denver for national competitions.

Traveling with Joyce and the kids was frequent over the years. When the kids were grown, Phil and Joyce enjoyed international travel together visiting Venezuela, France, Ireland, Scotland and many islands as they cruised the Caribbean.

Phil was a born salesman and his achievements were many. His career began at Michigan Brand Cottage Cheese and he grew the business over the next 10 years. His company eventually evolved into Bernea Foods, a food distribution company servicing Michigan, Northern Indiana and Ohio. Phil was innovative and created many products that impacted the food distribution and trucking industry. Amongst his achievements, Phil brought Yoplait Yogurt to the United States having earned their National Distribution Contract. In addition, Bernea had its own line of high quality, fresh dairy products and Chef Bernea pies (made from Michigan fruit – apple, cherry and blueberry). They were such a hit former Governor Engler came to Bernea for a visit and a press conference. Bernea was very successful for 22 years, after which Phil retired and sold the company to its biggest competitor, I&K Distributors.  He then spent over 20 years delivering campers across the U.S. He just loved to drive on down the highway.

Phil is survived by daughter, Laurie (Tim) Andrus, sons, Terry Rand, Sean (Pam) and Brent (Merri); step-son, Todd (Loyale) Albright; many grandchildren including, Cameron and Marissa Andrus and Samantha and Enzo Berner along with many nieces and nephews.

He was preceded in death by his parents, wife and siblings, Rosemary Anson, William Berner, Jerome Berner, Mary Catherine Folkert and Frederick Berner.

A Mass of Christian Burial will be held at 11:00 A.M., Tuesday, July 20, 2021 at St. Margaret Catholic Church in Otsego, with Rev. Fr. Simon Manjooran officiating.

Contributions in memory of Phil may be made to Wishbone Animal Rescue.

Offer Condolence for the family of Philip Berner