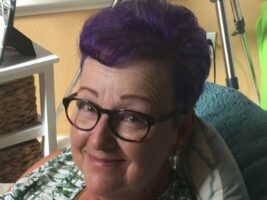 She was born February 24, 1953 in Kalamazoo, the daughter of Paul and Jane (Rosenberg) Williams. Peggy was a 1971 Plainwell High School graduate and lifelong resident of the area. She worked as a graphic designer for Auto Trader and J-Ad Graphics from 1983 until her retirement in 2014.

Peggy enjoyed online shopping, crocheting, swimming, walking and exercising. She loved spending time with her grandchildren and taking care of her dog. On April 21, 1972 at St. Margaret Catholic Church she married James Warnez. Together they enjoyed wintering in Florida where she liked taking walks along the beach and going to Disney World. Peggy was a member of the VFW Ladies Auxiliary in St. James City, Florida.

Surviving are her husband, Jim; sons, Aaron (Erin) Warnez of Plainwell and Daniel (Heidi) Warnez of Orlando; grandchildren, Genevieve, Abigail, Lillian, Kennedy, Sarah and Finley; her brother, Paul Williams along with many nieces and nephews.

She was preceded in death by her parents and brother, Daniel.

A private family gathering will be held at a later time.

Contributions in memory of Peggy may be made to St. Margaret Catholic School.

Offer Condolence for the family of Peggy J. Warnez