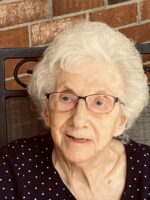 Pearl L Koning passed away on Friday, July 15 at the age of 95. She was born on June 7, 1927 in Chicago, Illinois to Herman and Lena Tammeling.  She was married to Earl H. Koning on February 19, 1949. He passed away in 2007.  Also preceding her in death were her parents, son; Mark J Koning, grandson; Aaron Wykstra, and her siblings; Sadie Van Tholen, Lena Lindemulder, Edith Dryden, Henrietta Hoff, Peter and Herman Tammeling . She is survived by her son; Thomas (Connie) Koning, and daughter; Arlene (Andy) Wykstra,  6 grandchildren, 7 great- grandchildren, and a great- great- grandson.

Pearl was an 8th grade graduate of Ebenezer Christian School in Chicago and graduated from McKinley High School in Chicago in 1945. Previous to her marriage, she was employed at Sears Roebuck Catalog Mail Order Company in Chicago. She was a stay at home mother to her three children. Pearl and Earl were foster parents to several children in the Kalamazoo County. She also cared for several neighborhood children. Her husband and she were charter members of the Westwood Christian Reformed Church and Faith Christian Reformed Church. Most recently, she attended of Faith Chapel Ministries.  She was a volunteer at North Christian and Kalamazoo Christian High School, Kalamazoo Gospel Mission, Alamo 4-H club, tutor for the Kalamazoo Literary

Council, a Sunday school teacher, and volunteer for the Bible League International.

There will be a private family burial at the Liberty Cemetery in Alamo Michigan.

The memorial services will be at Faith Chapel Ministries, 7736 W. G Avenue. Kalamazoo, MI, on Saturday, July 23, at 1 PM.

Memorial contributions may be made to the Kalamazoo Gospel Ministries, 448 North Burdick St, Kalamazoo, MI, 49007.

Messages of condolence for Pearl’s family may be posted at  www.WinkelFuneralHome.com.

Offer Condolence for the family of Pearl L. Koning