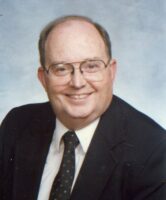 Paul Ezra Patterson was born in Altoona, PA, January 13, 1928. He was the son of Rev. Ezra and Anna Patterson. Paul was a retired United Methodist minister of the gospel and died November 13, 2021.

He graduated from Juniata College in Huntingdon, PA, in 1950, and from Garrett Biblical Institute at Northwestern University in Evanston, IL, in 1955. He and Beverly Baldwin, of Albion, MI, were united in marriage in 1955 at the First Methodist Church, Albion. Together they served United Methodist churches throughout Southwest Michigan from 1955 until 1990. He was also known for his interest in music, and especially as a pianist.

Surviving are several nieces and nephews.

Paul was preceded in death by parents, wife in 2016, and brother and sister-in-law, Rev. H.H. (Pat) and Esther Patterson.

At his request, cremation has taken place.

A private inurnment will be at the Oak Grove Cemetery, Lawton, MI.

Contributions in memory of Paul may be made to the Clark Retirement Community of Grand Rapids or Emmanuel Hospice in Grand Rapids.

Offer Condolence for the family of Paul E. Patterson