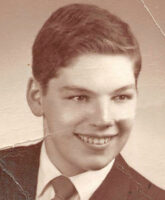 Norris passed away Friday, September 25, 2020 at his home in Cooper Township.

He was born October 4, 1934 in Kalamazoo the son of Harold and Mary (Metzger) Watkins. Norris proudly served his country in the U.S. Navy. For many years he had owned and operated Watkins Machine Shop until his retirement in 1998. In his free time Norris enjoyed micro midget racing, sports cars and watching his children and grandchildren play sports. He was a member of the Lions Club, Knights of Columbus, Winnebago Club and the Sports Car Club of America. On September 22, 1956 at St. Augustine Cathedral in Kalamazoo he married Sandra Sabo who survives.

He was preceded in death by his parents and son, Jeffrey.

A private family Mass of Christian Burial will be held at St. Augustine Cathedral.

In lieu of flowers contributions in memory of Norris may be made to St. Jude Children’s Research Hospital.

Offer Condolence for the family of Norris W. Watkins