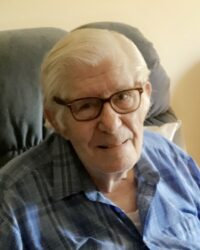 Mylan “Mike” Houseman passed away Thursday night, May 20, 2021, at Bronson Hospital in Kalamazoo.

Mike was born February 11, 1931 in Three Rivers, Michigan , son of William and Florence (Miller) Houseman. He served his country in the United States Air Force.
On August 21, 1954 he married Rose Ison in Angola, Indiana, she preceded him in death in 1998. Mike retired from the Plainwell School System. He enjoyed traveling, collecting lighthouses, singing, and watching sports, always rooting for Michigan teams. He liked days when the fish were biting. Mike was a Christian and enjoyed the companionship of friends during bible study.

Funeral services will be held at 1:00 pm on Tuesday, May 25, 2021 at Winkel Funeral Home in Otsego with the Reverend David Alderman officiating. Burial will follow at East Martin Cemetery. Visitation will be held from 4:00 to 6:00 pm on Monday at the funeral home. Memorial may be made to the Wounded Warrior Project.

Offer Condolence for the family of Mylan “Mike” Houseman