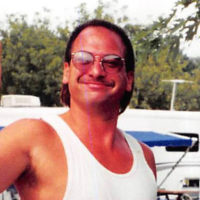 He was born October 12, 1960, the son of Lewis and Barbara (Langeance) Cooley. Mike was a 1978 Otsego High School graduate and lifelong resident of the area. Mike was a selfless parent and devoted friend. He passionately lived for spending time with his children and grandchildren.

Mike belonged to the Wormburner, enjoyed days on the lake, adventures at Silver Lake, hunting, fishing and was a jack of all trades. He was an extraordinarily dedicated work horse with a limitless work ethic. He worked for RockTenn Paper Mill for over 30 years followed by years as a HVAC tech throughout the area. On October 17, 1987 he married the love of his life, Cindy Anderson who passed away in 2002.

Surviving are his loving children, Rachelle Cooley and Matthew Cooley both of Otsego; he was Papa to his grandchildren, Kayden Bienz, Aliahana “Peanut” Cooley, Skylane Smith and Gideon “G” Smith; siblings, Stef (Mack) Makela and Sue (Rick) Rickli both of Otsego; mother and father-in-law, Judy and Rodger Anderson and brother-in-law, Jeffrey Anderson along with several nieces, nephews and extended family members.

He was preceded in death by his parents, wife, and several close friends who were inherently family.

A private memorial will take place at a later time.

Contributions in memory of Mike may be made to the Juvenile Diabetes Research Foundation.

Offer Condolence for the family of Michael L. Cooley