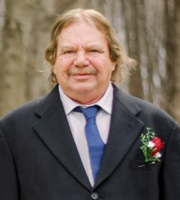 Michael Goudy of Allegan passed away Thursday, December 22, 2022 in Holland. Mike was born July 17, 1954 in Plainwell the son of Lester ‘Sam’ and Patricia (MacDonald) Goudy.

He was an Otsego High School graduated and had served his country in the Marines.

Surviving are his children, Jamie Moss, Jesse Goudy and Jessica Wilson; 4 grandchildren; his sister, Vicki Martin; his nieces and nephews, Leslie Todd, Nikki Gomber, Ammie Coburn, Rhonda Gorton, Doug DePauw and Robby Doubblestien. He was preceded in death by his parents and a sister Susan Gomber.

Cremation has taken place and no services are planned.

Offer Condolence for the family of Michael Goudy