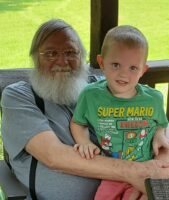 He was born December 26, 1950 in Kalamazoo, the son of Donald and Fern (Newton) Ingold. For 40 years Merle worked at Frost Standard which later became McDonald’s Towing and Rescue until his retirement in 2013. In his free time he enjoyed riding dirt bikes, camping, hunting and watching NASCAR and fireworks. Merle was happiest when surrounded by his family especially his grandchildren. On December 10, 1971 in Oshtemo Township he married Kim Carlson who survives.

He was preceded in death by his parents, granddaughter, Taryn Rambadt; brother, Russell Ingold; niece, Stephanie and nephew, Cody.

Friends may visit with Merle’s family from 4-6PM, Saturday, November 6, 2021, at the Alamo Community Congregational Church.

Offer Condolence for the family of Merle E. Ingold