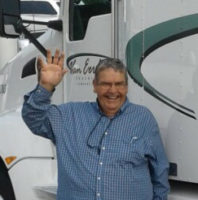 Melvin Mallett of Plainwell passed away Thursday, April 16, 2020 at Bronson Hospital in Kalamazoo.

He was born on November 26, 1946 to Ira and Doris (Lucas) Mallet. Melvin drove trucks for many companies over the years, most recently for VanEerden Trucking in Byron Center. In his free time he enjoyed fishing and hunting. Melvin was a member of the Loyal Order of Moose.

He is survived by his children, Melissa (Ray) Podsiadlik of Alma, Danette Mallett of Curran and Robert (LaShan) Mallett of ND; step-sons, Shane, Mike and Tommy Mansfield; daughter-in-law, Karen Mallett; grandchildren, Christopher (Trina) Podsiadlik, Britni Podsiadlik, Nicholas Podsiadlik, Shay Kobel, Landon Mallett, Rylee Mallett and Saxon Mansfield; many great-grandchildren who he adored; siblings, Marv Mallett, Nancy Jackson and Johnny Jackson and by his close friend, Sharon Burgess, who was like a sister to him.

Burial of ashes will take place in Curran, MI at a later time.

Contributions in memory of Melvin may be made to St. Francis Episcopal Church or to the American Cancer Society.

Offer Condolence for the family of Melvin C. Mallett