You are here: Home / Obituaries / Maurice A. Wuis 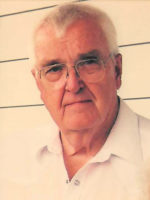 Maurice passed away Friday, April 12, 2019 at Stanford Lodge in Plainwell.

Morry was born September 22, 1927 in Otsego, the son of Leonard and Dorothy (Button) Wuis. He had been a machine operator for 37 years at Mac Sim Bar/Mead until his retirement in 1985.

Morry was an avid deer hunter and enjoyed hunting in Wyoming and Michigan. He also enjoyed classic cars and had won several trophies at different car shows over the years and always took part in the Creative Arts Festival car show.

Surviving are his daughter, Cindy (David) Richardson of Tennessee; grandson Scott (Stephanie) Richardson and their children, Karrah and Brennan and his sister, Lucille Lovett.

He was preceded in death by his parents and wife.

Contributions in memory of Morry may be made to Habitat for Humanity.

Offer Condolence for the family of Maurice A. Wuis