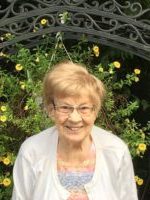 Mary passed away Friday, September 21, 2018 at her home in Kalamazoo.

She was born in Lake Forest, Illinois on September 16, 1926 to Charles and Rachael (Hart) Jacobs.  She was a 1944 Otsego High School graduate. Mary met and wed Irwin Frank “Bunker” Hill Jr. in 1947 and became a military wife and devoted mother. She lived a joyful life and always had a smile on her face with unforgettable laughter. In her free time she liked bowling, quilting and was an avid bridge player.

They lived at many military bases over the years, at the end of his career Bunker was stationed in Oklahoma. Following his retirement they lived in Lawton, OK and wintered in Texas until his passing in 2001 and Mary returned to Michigan in 2012.

She was preceded in death by her parents; her husband; two children, Janet Justice and Barbara Melnyk and by her brothers, William “Billy” (Rosemary) Jacobs, Robert “Bobby” Jacobs and Bruce Jacobs.

Burial of ashes will take place at Fort Custer National Cemetery in Augusta.

Contributions in memory of Mary may be made to the charity of your choice.

Offer Condolence for the family of Mary K. Hill