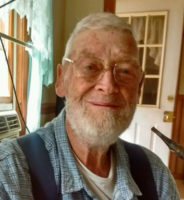 Marlin passed away Saturday, April 18, 2020 at his home in Plainwell.

He was born August 26, 1939 in Plainwell, the son of Kenelm and Olive (Oswald) Digby. Marlin was an Otsego High School graduate and proudly served his country in the U.S. Navy during Vietnam. He had been an Otsego police officer, a salesman, independent truck driver and a farmer.

He was preceded in death by his parents and nieces and nephew, Debbie, Penny and Arnold.

A memorial gathering will be held at a later time.

Contributions in memory of Marlin may be made to the American Veterans organization of your choice.

Offer Condolence for the family of Marlin L. Digby