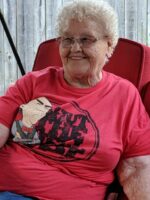 Margie passed away Wednesday, September 15, 2021 at her home in Otsego.

She was born February 22, 1929 in Otsego, the daughter of Clair and Alice (Warner) Town. For over 15 years Margie worked as a kitchen aide at Otsego Public Schools. In her free time she enjoyed collecting dolls, embroidering pillowcases and taking care of her family. On August 20, 1977 in Otsego she married Herbert Newton who passed away in 2017.

She was preceded in death by her parents and husband.

Burial of ashes will take place at Mountain Home Cemetery.

Contributions in memory of Margie may be made to Wings of Hope Hospice.

Offer Condolence for the family of Marjory F. Newton