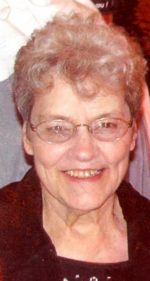 Marion passed away Thursday February 6, 2020 at Borgess Hospital in Kalamazoo.

She was born March 4, 1933 in Orangeville Twp., the daughter of Leonard and Katheryn (Robar) Riley. Marion enjoyed cooking, baking, playing the bump game, giving her brothers a hard time and spending time with her family. She loved country music, playing cards and bingo and completing puzzles. Marion was a life member of V.F.W. Camp Trotter on Bill’s Lake in Newaygo, MI, V.F.W. National Home in Eaton Rapids, MI and at V.F.W. Auxiliary Post 3030 in Otsego where she served as president of the post from 1974 to 1975.

Marion was employed at Kal-Equip for several years and later with Plainwell High School as night custodial supervisor where she worked for 15 years until she retired in 1993. She was married to Ken Holly on October 21, 1950. They were married for 32 years, Ken passed away on October 17, 1982. On May 19, 1989 she married Billy Swinney who preceded her in death on September 28, 2016.

She was also preceded in death by her parents;  her twin sister Mary  who died at birth, sister Geraldine, and brothers, George, David, Patrick and Leonard.

She is survived by her sisters, Leona McKee, Katheryn Menck and Margaret Delp; her step- sons, Jason Swinney and Greg Evink, step grandchild, 2 step great grandchildren and by many nieces and nephews.

A memorial celebration will be held at 11:00 A.M. on Tuesday, February 11, 2020, at Winkel Funeral Home in Otsego with Celebrant Bill Rose officiating.

Burial of ashes will follow at Mountain Home Cemetery in Otsego.

Contributions in memory of Marion may be made to Wings of Hope Hospice.

Offer Condolence for the family of Marion D. Swinney