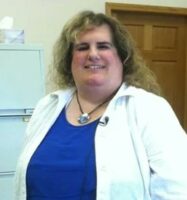 Marcia went home to be with our Lord on Wednesday, December 15, 2021 at Rose Arbor Hospice in Kalamazoo.

She was born June 13, 1968 in Zeeland, the oldest child of Harvey and Carol (Van Kampen) Visser. She attended and graduated from Martin Public Schools, Calvin University and Western Michigan University with an MSW, and later a Bachelor of Science to pursue a career in the medical field.

Marcia was instrumental in establishing the Martin Area Resource Center and served as its first Executive Director. She was currently the Executive Director of Renewed Hope Free Health Clinic in Allegan and thoroughly enjoyed working as a science educator at the Air Zoo in Kalamazoo. Working with children and serving those with medical and food/housing needs was her calling.

Marcia was an animal lover and served as a 4-H leader while living in Hudsonville. She loved horses and treasured the time she spent caring for, training and working with them. She also raised sheep and rabbits. She loved her two cats and the four Seeing Eye dogs she had over the years.

In her free time she liked baking, reading, gardening, hand sewing and crocheting. Marcia was strong willed and determined. She inspired many people by her positive attitude and optimism. She was diagnosed with Retinoblastoma as a toddler that led to her becoming blind at the age of three. Despite this it did not keep her from fulfilling dreams and achieving goals. She challenged many stereotypes and preconceived beliefs regarding abilities of disabled individuals.

Marcia was preceded in death by her first husband, John Charles Beare and a brother, Michael Allison.

Friends may visit with Marcia’s family starting at 10:00 A.M., Monday, December 20, 2021 at the Watson Bible Church in Otsego, until the time of the funeral service at 11:00 A.M., with Pastor Tim Farley officiating.

In lieu of flowers contributions in memory of Marcia may be made to Renewed Hope Free Health Clinic in Allegan.

Offer Condolence for the family of Marcia L. Marques