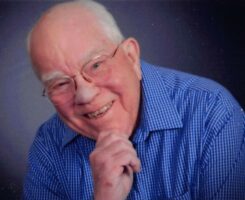 He was born in Crystal, MI on October 1, 1930. Together with his sister, Ruth, Lynn was raised in Crystal, MI. Preceding him in death were his parents, Luke and Mabel, Ruth and her husband Wayne Sell, sister Helen, and brother Dean.

On June 20, 1953, Lynn was united in marriage to Sally A. Davarn, who also preceded him in death. Their union was blessed with three children. Daughter Amy Rogers (Stephen) of Leesburg, VA; Son Kevin Marcy (Susan) of Plainwell, MI; and daughter Julie Marcy of Dearborn. He is also survived by his son, Tim DeVoogd of Ithaca, NY. Lynn and Sally have six grandchildren: Mike (and Leslie) Rogers; Emily (and Erik) Smith; Christopher Rogers; Brian (and Lauren) Marcy; Kaitlyn (and Michael) Winclechter; and Grace (and Max) Hultquist. They have 7 great grandchildren: Amelia and Gillian Rogers; Zara and Frances Marcy; Jackson and Reid Winclechter; and Luca Lynn Hultquist.

In 1951, Lynn left college at UM to serve 4 years in the USAF until 1955, reaching the rank of Tech Sergeant at the time of his honorable discharge. He was assigned as a Special Agent to the Office of Special Investigations. It was during this time that Lynn was introduced to the Polygraph Science. Following discharge, and a BS in Police Administration at MSU, Lynn was trained as a polygraph examiner at The Keeler Polygraph Institute (Chicago), and subsequently hired there as a polygraph examiner in 1956.

In the early 70’s Lynn worked with the Michigan State Legislature to introduce and enact a State Licensing Law for polygraph examiners. In 1972, he was appointed by Governor Milliken to serve as the first Director of the State Licensing Board of Forensic Polygraph Examiners. In gratitude for his efforts, his fellow Board members voted that he should receive Polygraph Examiner License number 00001. Throughout his career, Lynn was qualified as an Expert Witness on Polygraph Science and Technique in nine Federal Courts; and 18 State Courts. He stopped counting the number of polygraph examinations conducted when he reached 10,000 some 20 years before he finished his career.

Driven to always learn and improve, Lynn completed a Masters in Guidance and Counseling from EMU a few months before his 50th birthday. While Lynn often referred to passion for his polygraph career as a “jealous mistress”, he still managed to raise a family together with the one true love of his life, Sally.

Regular family vacations to the Traverse City area; hunting and fishing trips with children and grandchildren, and attending school functions or sporting events provided the joy of being a parent and grandparent. In 1990, Lynn and Sally bought a condo on East Grand Traverse Bay, and enjoyed time with each other there 2 or more times each year: For the Spring blossoming of the cherry trees; and the Fall color display of the Michigan hardwoods. They enjoyed their favorite restaurants, and drives around the Leelanau and Old Mission peninsulas, maybe stopping every now & then to pick morel mushrooms.

Ask Lynn what his favorite game was, and he would tell you cribbage. Whether with friends or family members, the competition was always serious. His favorite sports to watch were Major League Baseball, and NCAA Basketball. Luckily, each of these sport season’s ended right about the time that the other one started. Lynn’s 91 years were active, full and vibrant. In recent months, he often remarked how very good God had been to him, a life filled with so many rich blessings. He looked forwarded to being reunited with Sally, and chose these words for his headstone: Wed 1953 Together Forever His interment will be at Fort Custer National Cemetery.

Any donations can be made to Wings of Hope Hospice, Allegan, MI; or to St. Anselm Catholic School, Dearborn Heights, MI.

The family will receive visitors Tuesday March 15 from 2-4 PM and 6-8 PM at Winkel Funeral Home, Otsego, MI. At 7:15 PM visitors will be invited to share any words of remembrance. Mass of Christian Burial will be at St. Margaret Church, Otsego, MI on Wednesday March 16th, 11:00 AM.

Please call Samantha Stone at 269-888-4800 she will be able to book your rooms. Please book under: Julie Marcy Event

They must identify themselves as members of the group.  All reservations must be guaranteed by a major credit card. Rate $99

Offer Condolence for the family of Lynn P. Marcy