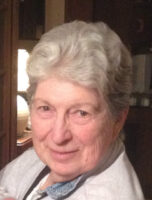 Linda Louise (Cole) Schacher passed away at her home in Otsego on October 10, 2022.

She was born to Norman and Margaret (Addison) Cole on March 11, 1933 in Bluefield, Virginia. She graduated from Stuart Hall in Staunton, Virginia, and went on to study architecture at Ohio State University. It was there that she met her future husband, Thomas E. Schacher II, a World War II veteran and law student. They were married on June 28, 1953 in Springville, Virginia. Linda devoted herself to being a caring wife, homemaker, and loving mother.

In 1968, she, along with her husband and two young children, moved to a small “gentleman’s farm” in Ortonville, Michigan, where she would live for the next 43 years. There she enjoyed her horses, goats, dogs, and cats, as well as gardening and teaching swimming lessons in the pond. She became quite accomplished in a variety of arts and crafts, including knitting, crocheting, basketry, and painting, and even taught classes for several years.

In 2011, having been widowed in 2007, she moved to be near her son’s family in Otsego, where she enjoyed taking care of her yard, feeding and watching the birds and squirrels, and watching just about any sport on TV, especially her beloved Buckeyes.

She is preceded in death by her parents, her husband, and her daughter Susan.

She will be missed by her brother Norman Cole Jr., son Thom, his wife Katherine, her grandchildren Nate Schacher, Beth (Schacher) Carroll,  Svetlana (Schacher) Belleau (daughter of Susan), and her two great grandchildren.

A private family burial of ashes will take place at noon on November 5 at Ortonville Cemetery.

Offer Condolence for the family of Linda L. Schacher