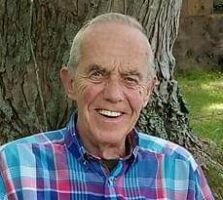 He was born December 1, 1941 in Plainwell, the son of Varsal and Donnabelle (Livingston) Fales. Leon graduated from Delton High School and worked at Parker Hannifin for 20 years. He also owned and operated his own farm along with his family. In his spare time Leon enjoyed woodworking. On April 9, 1966 he married Catherine Bromley who passed away in 2013.

Surviving are his daughters, Cindy (Kenny) Head of Kalamazoo, Wendy Prange of Caledonia and Kimberly (Bud) Morse of Hamilton; 4 grandchildren, Dustin, Jack, Rachel and Cambri; great-grandsons, Braxton and Leon as well as his 2 older siblings.

He was preceded in death by his parents; wife; grandson, Ben; step-parents, Dorothy Fales and Fritz Kissinger and 2 sisters.

Friends may visit with Leon’s family starting at 10 AM, Wednesday, August 4, 2021 at the Winkel Funeral Home, Otsego, until the time of the funeral service at 11:00 A.M.

Contributions in memory of Leon may be made to the American Heart Association.

Offer Condolence for the family of Leon L. Fales