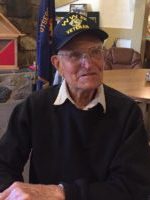 Laurin Ramsey passed away Sunday, January 6, 2019 at Vicinia Gardens where he was a resident for approximately two years.

Laurin was born March 20, 1923 in Muskegon to Russell and Lois (Wing) Ramsey. After graduating from Muskegon High School, he enlisted in the military in 1943 where he served in the Army during World War II. Laurin was a long time employee of Michigan Consolidated Gas Company until his retirement in 1979. In retirement Laurin enjoyed his family and friends, traveling, gardening and working in his tree nursery. On August 25, 1951 in Muskegon he married Doris Workman who precedes him in death.

Laurin will be laid to rest next to his wife at 2:00 P.M., at Fort Custer National Cemetery in Augusta.

Contributions in memory of Laurin may be made to Paws With A Cause of Wayland.

Offer Condolence for the family of Laurin D. Ramsey