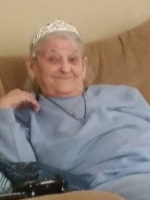 Laquieta passed away Monday, June 24, 2019 at Bronson Hospital in Kalamazoo.

She was born January 24, 1934 in Mancelona, the daughter of Harold and Irma (Hough) Fillmore. Laquieta was a hard worker and had raised 7 children on her own. She believed in guardian angels and was a free spirit who lived life to the fullest. Laquieta loved dogs and country western music and having a cold Budweiser with her friends and family. She liked collecting porcelain baby dolls and angels.

She was preceded in death by her parents, brothers and grandson, Matthew.

Contributions in memory of Laquieta may be made to the American Heart Association.

Offer Condolence for the family of Laquieta J. Rice