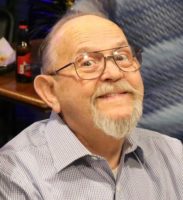 Ken was born on July 8, 1945 in Richland, MI, the youngest of three children born to Leo and Pauline (Piasecki) Reau. On January 26, 2007 he married Betty Jean (Ruoss) Bradley. Ken grew up in Richland before moving to Kalamazoo where he worked at Kalamazoo Stamp and Die which later became Tower Automotive. He worked as a tool and die maker for many years until his retirement. Ken was actively involved in the local UAW, at one point serving as their treasurer.

Ken was a great man with a tremendous sense of humor. He was known for “telling it like it is”. Ken loved to camp, often taking his family on camping trips when his children were younger and later spending the winters RV-ing in Texas. He was an avid motorcyclist taking many cross-country trips on his beloved Honda Goldwing. He also loved boating, particularly on Gull Lake as well as visiting many amusement parks.

In lieu of flowers contributions in Ken’s name can be made to Hospice of South West Michigan or the Cystic Fibrosis Foundation.

Offer Condolence for the family of Kenneth L. Reau