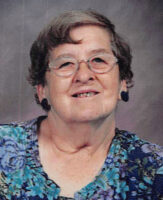 June passed away Wednesday, January 20, 2021 at Plainwell Pines, where she had been a resident for the last few years and was lovingly known as June-Bug.

She was born February 6, 1931 in Kalamazoo, the daughter of Frank and Reca (Veldher) Loedeman. She had worked in food service at Borgess Medical Center and at several area restaurants. June enjoyed playing bingo and eating fried chicken and drinking pepsi. She loved animals especially her boston terrier, July. In 1974 she married Leonard Thompson who preceded her in death.

Surviving are several nieces, nephews, great-nieces, great-nephews and many special friends including Ted and Evelyn Campbell of Plainwell.

A graveside service will be held at 11:00 A.M., Monday, January 25, 2021 at Alamo Center Cemetery with celebrant Bill Rose officiating.

A memorial celebration to honor June will be held at a later time.

Contributions in memory of June may be made to the animal rescue or food pantry of your choice.

Offer Condolence for the family of June E. Thompson