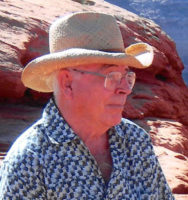 Joe passed away Tuesday, January 14, 2020 at Stanford Lodge in Plainwell.

He was born August 8, 1925 in Omaha, Nebraska, the son of James and Blanche (Morrill) Perry. Joe proudly served his country in the U.S. Navy during WWII. He moved to the area in 1947. For 35 years Joe had worked for Clarage Fan until his retirement. He went on to work another 18 years as a tool and die maker for Dorr Industries.

In his free time Joe enjoyed woodworking, making birdhouses and bookshelves, fishing, traveling and spending time in the mountains. Joe was a member of the Otsego VFW Post #3030. On December 8, 1947 in Battle Creek he married Anna Losiewski who passed away in 2002.

Surviving are his nephew, Terry (Linda) Marcinkowski; nieces, Sally Carpenter, Agnes Chapman, Irene Franks and Tracy Keene along with many great and great-great nieces and nephews.

He was preceded in death by his parents, wife and sister.

Contributions in memory of Joe may be made to Hospice Care of Southwest Michigan.

Offer Condolence for the family of Joseph H. Perry